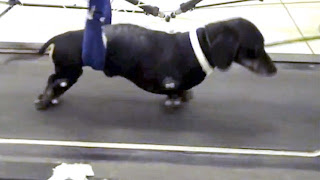 May Hay, a dog lover , used to cart her 10-
year-old dachshund, Jasper, around in a
trolley because his short hind legs were
paralyzed after he was hit by a car.
But after researchers took some cells from
the dog's nose -- that's right, his nose --
and implanted them in his injured spine
as part of a new study, Jasper could walk
again.

Jasper was one of 34 dogs with paralyzed
hind legs to participate in a randomized,
double-blind study at Cambridge
University in England. The results have
now been published in Brain, a neurology
journal. Researchers first collected
olfactory "ensheathing" cells from the
dogs' noses, cultured them in Petri dishes
for three to five weeks and then injected
them into the dogs' spines.
Researchers are still a long way from
restoring spinal function in humans,
researcher Geoffrey Raisman, chair of
Neural Regeneration at University College
London, told the BBC. Raisman discovered
olfactory ensheathing cells in 1985.
"This is not a cure for spinal cord injury
in humans -- that could still be a long
way off," Raisman said. "But this is the
most encouraging advance for some years
and is a significant step on the road
toward it."
Culled from ABC News
News Science