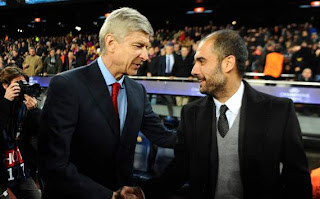 Pep Guardiola has told Arsenal that they are top of his Premier League wishlist.
Representatives of the former Barcelona manager have told the north London club that he would be very keen to be considered for the manager's job if it was to become available next year.

The question remains if Arsenal would be willing to sack Wenger as his contract runs until June 2014, and is yet to extend it.