SNOOP DOGG SMOKES 81 WRAPS OF WEED EVERYDAY, CAN U BEAT THAT? 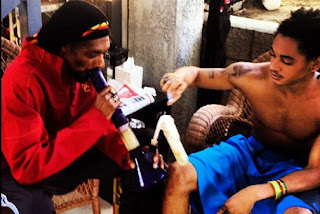 The next time Snoop Dogg decides to change his name we suggest "Iron Lungs." The 41-year old rapper recently held a Reddit "Ask Me Anything" session, which gave fans the chance to interact with him by submitting questions.
Snoop revealed some interesting facts and gave his opinion on a few subjects.
The California legend believes weed should be legalized and taxed, says Willie Nelson, B-Real and Wiz Khalifa are the only people who have out
smoked him, the longest he's gone without smoking is 164 days, he would love to smoke with Bob Marley, his favorite soundtrack to smoke to is Curtis Mayfield's "Superfly," he misses 2Pac and he smokes 81 blunts a day, 7 days a week.