- December 13, 2012
Before you dismiss this off as lie, just take a second and read this article.
This occurrence is so uncommon that only a few cases have been documented in medical history and occurs when two or more of a woman's eggs are fertilized by different men within the same ovulation period, and is medically known as "Heteropaternal Superfecundation" .This is possible as sperms are capable of waiting in the Fallopian tubes.
This was the case at the Maury Show, where 19 year old Alejandrina came to prove to her ex-boyfriend, Jose that he was the father of her babies; Julies and Kayla, through a paternity test conducted by the producer of the TV show, before the results of the DNA test was read out Nauru Povich, Alejandrina had said that she never cheated on her then boyfriend. But Jose called her a party girl and a whore.
The paternity (DNA) test proved Jose's fears but furthered condemned Alejandrina as it says only one of the twins was fathered by Jose. 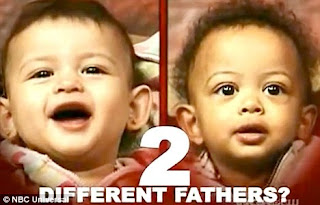 Twins: Jayla, left, and Julius, who have two different fathers making them half brothers Mother: Alejandrina said that she did not sleep with any one else when she was with Jose but a paternity test said differently 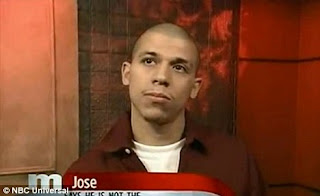 Father: Jose said he was not the father of the twins and claimed his ex-girlfriend was a 'party girl' who slept around 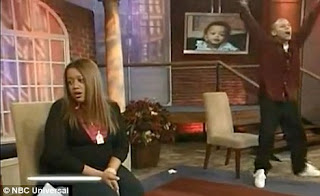 Reaction: Jose jumped for joy when he found out that Julius was not his and called Alejandrina a whore
News