BLACKBERRY 10 LAUNCH: ALL YOU NEED TO KNOW ABOUT IT

Two new devices were announced  by Blackberry (rebranded to Blackberry from RIM) today (January 30th). The two devices are aimed at covering the bases in the Smartphone market. The Z10 and Q10, the Z10 is a full touch slab device (which is the most popular form factor at the moment) while the Q10 stays true to it's blackberry roots by embracing the form factor found in.the Blackberry 9900 (popularly known as Bold 5 in Nigeria).
The new Blackberry devices run the new Blackberry OS10 (which is based on the QNX platform) which delivers a better performance than the older Blackberry OS.
Some new features found in the new blackberry devices includes the Blackberry  Hub, Blackberry Peek, Video Calling through BBM, Time Shift, 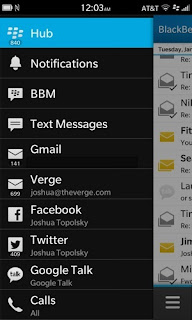 The Blackberry Hub integrates social networks like facebook, twitter and asking your emails and BBM therefore allowing you to reply messages, mentions, emails, Pings without switching applications. It also integrates with the contact hub and allows you to see any status updates by your friends.
Time shift is a new feature in the blackberry camera app that lets you edit pictures after taking them, and it also takes more than one picture at a time and lets you choose which one you like to save.
Story Maker allows you to edit and create home videos using pictures and videos on your blackberry.
The new BBM app now supports voice and video calling to your BBM contacts over mobile networks as opposed to Wi-Fi only found in the currrent BBM app 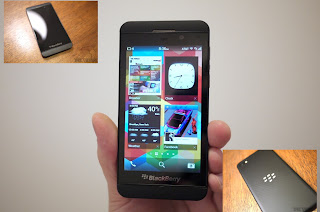 The Blackberry Z10 has a 4.2 inch large touchscreen with a resolution of 1280 x 768 pixels,a 1.5GHz CPU, 2GB of RAM to deliver top-notch multitasking, 16GB internal.memory which can be expanded by adding a microSD memory card, a 8Megapixel Camera with a 2 Megapixel front camera for video calling, GPS, WIFI, Bluetooth 4.0, NFC 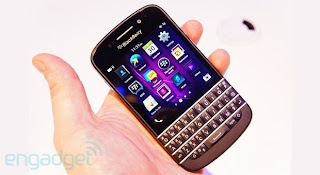 Q10 has a 3.1 inch touchscreen with a 720 x 720 pixels, a 1.5GHz processor, 2GB of RAM for multitasking, 16GB built-in memory which can also be expanded with a microSD memory card, 8 Megapixel camera with a 2Megapixel front camera for video calling and the usual radios for navigation and connectivity.

The Blackberry Z10 is expected to cost about 130,000 Naira (2,599 AED) based on the Middle-East prices released at the launch event.

The Blackberry World has over 70000 apps available  such as Skype, Twitter, Facebook, LinkedIn, Foursquare, Whatsapp, Kindle, Evermore, uTorrent Remote and many more. In addition to the standard Blackberry 10 apps, you can also run Android apps on the new Blackberry devices

If you are interested in a detailed review of the Blackberry Z10, head over to BGR