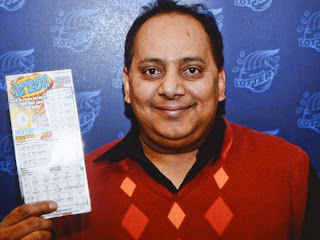 A man in Chicago, Urooj Khan lost his life a day after collecting his winning of $1million lottery under suspicious circumstances.
The Chicago Police Department are investigating his death on suspicions of foul play after a medical coroner found traces of cynaide in his blood stream. Khan died a day after receiving his cheque for $425000(minus taxes).
His wife of 12 years, Shabana Ansari aged 32 had called the paramedics,as he woke up shouting under intense pain and he was rushed to the St. Francis Hospital close to his home, where he was pronounced dead a few hours after being brought in. Tweet Follow @martinkem
Source
News