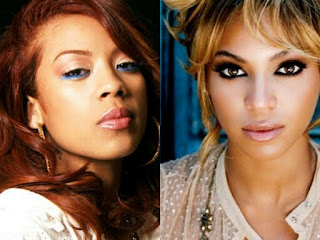 The "Sent from Heaven" singer has expressed her dislike for Beyonce's new single "Bow Down". And the singer took to twitter to express her displeasure.
Keyshia Cole had tweeted

"Can't stand when people all self righteous when it's convenient it makes them look good,"

she wrote, calling out the "Love On Top" for her aggressive song.

"But can still talk sh-t when convenient 2 FOH." "First 'Women need to Stick together' now b- tches better Bow," she continued. "Smh. But it's all G! Chicks stay shooting the sh-t…"

Fans of Beyonce were quick to come to her defence and bashed Keyshia College for her remarks.

"If @KeyshiaCole put as much energy in her struggle music as she did twitter beefing she would be as successful as Beyon... Nvm,"

Keyshia Cole responded to those tweets by

"I done kept it real from the start! #RespectTHAT."

This would not be the first time that Keyshia Cole would take to twitter to air similar views. As she had some not so flattering remarks about former Destiny's Child member, Michelle Williams for her Super Bowl half time show performance,

"F-ck that sh-t up then Beyonce! Bad b-tch central," she wrote. "I think I was frightened to blink for a sec. Then Michelle sung and woke my ass up from my daze! She always f-cking the groove up."