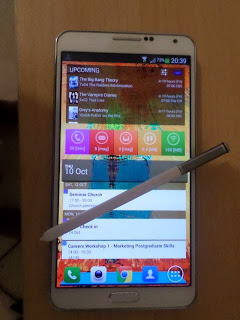 1. THE SCREEN
I love the big 5.7" Super AMOLED 1080p HD Screen. It has been rated as the best screen in the world. Viewing Pictures and watching Videos on this phone is amazing (a big step up from the screen on the Samsung Galaxy S2).

2. BATTERY LIFE
One of the things I hated about the Galaxy S2 was the battery which gave up on me before 2pm but the Galaxy Note 3 lasts and lasts and could easily go two days with moderate usage. However it was able to last a full day with my heavy usage. I do feel that it is less power hungry than my Galaxy S2 considering I could run down two of the batteries on the Galaxy S2 in eight hours. My test on the battery included 3 hours of web browsing, a few downloads, viewing pdfs during a 4 hour lecture, playing music for two hours, posting a few blog posts, running S health pedometer in the background. And the phone lasted 1d and 30 minutes before the battery dropped to 1%. 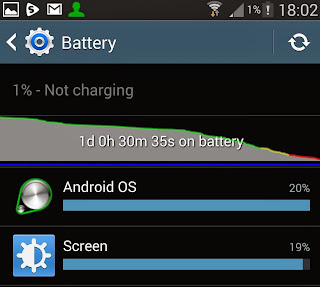 3. MULTITASKING
The 3GB RAM on the Galaxy Note 3 is a heaven sent, running multiple apps is easier and I could easily run multiple apps without it been shut down in the background.

4. BUILT-IN MEMORY
I really love the fact that the Galaxy Note 3 has a built-in memory of 32GB of which almost 30GB is available to the user. In the future all flagship devices should come with this memory size as the standard.

5. MULTIWINDOW
I really love the multi window feature introduced by Samsung. Having two apps on the screen really comes in handy sometime when I need to come two texts together. 6. Scrap Booker This is my favourite SPen related feature , I can easily save and share photos from any source by just flicking my little pen. Shared from Google Keep.
Android Galaxy Phones