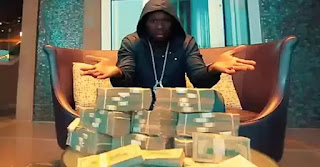 Unless you have been living under a rock, you probably heard that rapper 50 Cent has gone bankrupt and has filed for Chapter 11 Bankruptcy.

According to the New York Daily News, Curtis "50 Cent" Jackson is indebted to a tune of $28,478,920.75. Much of the $28 million is owned to Sleek Audio. Sleek Audio used to be the former partners to 50 Cent in his defunct Sleek by 50 headphones brand. The company successfully sued the rapper and won a settlement of $18,428,257 against the rapper. The second biggest creditor is Lastonia Leviston, baby mama to Rick Ross. Who is owed 5 million dollars by 50 Cent, after winning a Judgement against the rapper for releasing a sex tape of her. The other debts includes $1,737.33 owed to his grandfather, $137,880 to Bentley for the car he leases and over a million in legal fees.

Which poses the question about how someone that's reportedly worth $150 million dollars by Forbes is unable to meet his obligations to his creditors. According to his filings, 50 Cent's personal wealth is estimated to be about $15 million and therefore wouldn't be able to cover his debts. The remainder of the $150 million fortune is probably tied to businesses owned by 50 Cent, which is a clever ploy used by the rich and wealthy to protect themselves from lawsuits and taxes.