PHOTOS OF THE SAMSUNG GALAXY S6 EDGE PLUS SURFACES 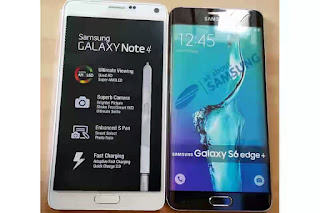 N.B: The device in the photo is a demo unit of the Samsung Galaxy S6 Edge Plus, and is placed side by side with a Galaxy Note 4 for size comparison
Source: All About Samsung via Engadget
Galaxy S6 edge+ Samsung