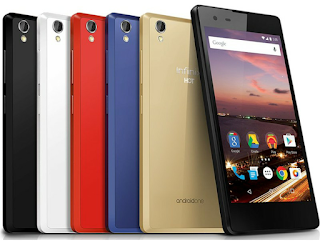 Android One, Google's initiative to bring affordable smartphones to masses has just been launched in several African countries‎ such as Egypt, Ghana, Ivory Coast, Kenya Morrocco and Nigeria.
The Android One program for Africa begins with the Infinix HOT 2 which goes for sale at $88 or N17500 for the base  model‎. The Infinix HOT 2 would be powered by a quadcore MediaTek processor, 1GB RAM with dual SIM support. The infinix HOT 2 would launch with Android 5.1.1 Lollipop which would upgraded to Android 6.0 Marshmallow once available.
The Infinix HOT 2 will be available in either 1GB or 2GB RAM variants and five colours; red, blue, black, white and gold. The 2GB variant will cost about $98 or N19500.
In addition to the Infinix HOT 2, Google also launched a new version of its Google Search and YouTube apps for Africa. ‎The Google Search app has been optimized for devices with 512MB RAM. The YouTube app will allow users to store an unlimited amount of videos for offline viewing (48).
Source:Google
Android google Infinix Infinix HOT2 YouTube