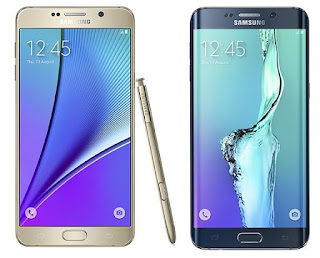 Samsung has just announced the newest memebrs of it's Galaxy Flagship devices, The Galaxy Note 5 and Galaxy S6 edge+, today at its Galaxy Unpacked. The both devices shared the new design language introduced with the Galaxy S6 and Galaxy S6 edge. The Galaxy Note 5 and S6 edge+ share the same 5.7 inch QHD display and are both powered by the Quad core Samsung Exynos 7420 processor. The rest of the spec sheet includes 5MP/16MP front and back Camera, 4GB, 3000mAH, Fast charging via USB or Wireless.

The Galaxy Note 5 and S6 edge+ would both have an improved fast wireless charghing feature which charges the devices from 0 to 100% within 2 hours. Another useful new feature to come with these devices is the ability to livestream directly from your Galaxy Note 5 or S6 edge+ to YouTube.  The S-pen on the Note 5 has been improved to give a more natural ball pen type feel.