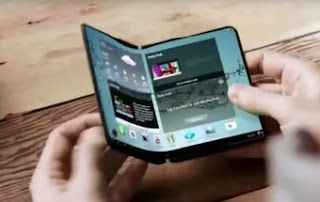 According to some Bloomberg sources, Samsung would be announcing two smartphones that would feature a folding display sometime in 2017 possibly during the Mobile World Congress (MWC) early next year.
According to the Bloomberg report, these Samsung devuces would take advantage of Samsung's plastic OLED displays which would allow the devices to be folded into two sections. One of the devices is said to be capable  of been folded into two symmetrical sections like a calmshell or cosmetic box. While the other is said to have a dual display mode allowing it to be used as a smartphone with a 5 inch display or a tablet with an 8 inch display.
Samsung has been working on foldable displays for quite a while now and how has acquired quite a few patents on it.
Bendable display Samsung