Twitter announced yesterday that it was introducing Read receipts to its popular DM feature (There's a song about it, Go figure). And it's started rolling out with the new Twitter app update. Apparently the way to go Twitter keep giving is new features no one cares about while ignoring those features that users request for.

If you're like me and you've got no love for this ridiculous new feature, you can disable it in a few simple steps.

1. Got to the Settings menu by swiping left to right. 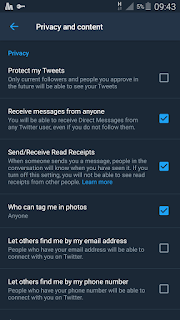