Incredible!! WhatsApp Status has even got more users than Snapchat

- July 27, 2017
Today was a day of celebration at Facebook. Not only did the parent company clock in a massive number of daily users (2 Billion if you're keeping count), the other services under its belt like Instagram and WhatsApp are doing exceptionally well too.

According to the shared info graphic (see the images below) WhatsApp reached a major milestone as it announced that it averages a Billion daily users sending over 55 billion messages daily. WhatsApp rise to the top over the years has been amazing, it has gone from that app you downloaded because your friends are on it to that app that you needed to download because everyone uses it now. 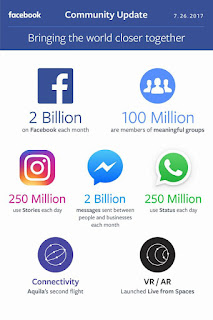 One thing that didn't get as much press from WhatsApp was that its "Status" feature which cloned from Snapchat' Stories is a big hit averaging 250 million daily users. Which makes this secondary feature, that i swear nobody uses, an even bigger platform than Snapchat which lags way behind with 166 million users. (crazy, right). 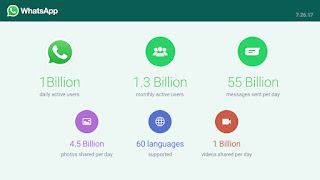 Facebook recent success in copying & cloning Snapchat features gives credence to the age old saying that "if they refuse to sell their business to you, copy their ideas".
The success of Stories on WhatsApp and Instagram can't come at a worse time for Snap, whose share price has continued to take a tumble since its IPO.
Facebook Snapchat Whatsapp