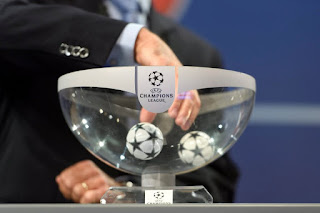 The draws for the group stage of what's undoubtedly the greatest annual sporting event was held yesterday in Monaco. In addition to the draws, the awards for the best players in UEFA club competitions was almost handed out.
The award was almost exclusively a Real Madrid thing with the exception of Gianluigi Buffon who picked up the Best Goalie award, The best defender award went to the Real Madrid Captain Sergio Ramos, Lukas Modric took the best midfielder award and Cristiano Ronaldo went home with best forward award. The awards for  the best men's and women's player of the year was also handed out.
The award for the best women's player of the season  went to Lieke Martens who recently won the UEFA Women's Euro Championship with the Netherlands. The award for the UEFA Best men's player of the season went to none other than Cristiano Ronaldo who's had a exceptional year winning the Champions league, La Liga, Club World Cup and the Euros.
The draws pitied some familiar foes with Real Madrid taking on Dortmund once again. English Champions Chelsea find themselves in the same group as Atletico Madrid, while Barça has been handed an opportunity to do-over their quarter-final defeat at the hands of Italian Champions Juventus. One team that would be rueing their luck would be Tottenham Hotspurs who have the unenviable position of having to face both Real Madrid and Dortmund while Manchester United and Liverpool couldn't have wished for a better pairing than they got.
The composition of the groups are as follows:
GROUP A
Benfica 🇵🇹
Manchester United 🇬🇧
Basel 🇨🇭
CSKA Moscow 🇷🇺
GROUP B
Bayern Munich 🇩🇪
PSG 🇫🇷
Anderlecht 🇧🇪
Celtic 🇬🇧
GROUP C
Chelsea 🇬🇧
Atletico Madrid 🇪🇸
Roma 🇮🇹
Qarabag 🇦🇿
GROUP D
Juventus 🇮🇹
Barcelona 🇪🇸
Olympiacos 🇬🇷
Sporting 🇵🇹
GROUP E
Spartak Moscow 🇷🇺
Sevilla 🇪🇸
Liverpool 🇬🇧
NK Maribor 🇸🇮
GROUP F
Shaktnak Donetsk 🇺🇦
Manchester City 🇬🇧
Napoli 🇮🇹
Feyenoord 🇳🇱
GROUP G
Monaco 🇫🇷
Porto 🇵🇹
Beskitas 🇹🇷
Leipzig 🇩🇪
GROUP H
Real Madrid 🇪🇸
Borussia Dortmund 🇩🇪
Tottenham Hotspurs 🇬🇧
APOEL 🇨🇾


The group stage matches of this year's UEFA Champions league will be played as follows: