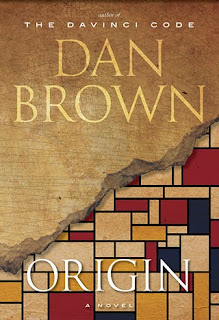 I've been out of the loop for a minute that i was caught by the surprise announcement that my beloved Dan Brown had released another one of his Robert Langdon pseudo-religious murder mystery adventure titled Origin (Hat Tip to Charles Darwin) . Origin sees Prof. Langdon trying to uncover the truth behind the death of a former student who had found the answer to man's greatest existential questions and obviously the cure to religion all the while been chased around Spain by another brainwashed Christian baddie.
While the new book Origin follows the tried and trusted formula employed by Dan Brown in his highly successful Robert Langdon series however it felt more of a harder read particularly when compared to his seminal The Da Vinci Code or any of his other books other than Inferno. As usual Dan Brown tries to draw the user into the world of the Langdon, with incredible descriptions of the buildings and art that leaves the reader with the urge to see those places and art, however  sometimes it felt less integral to the story and more of a filler ploy. I couldn't help but think that in trying to replicate the recipe that served him so well with his previous books he might have robbed Origin of the chance of being this amazing story especially with its overt style similarity to the previous books. Ultimately Dan Brown's take on Singularity which is a mildly hot button issue with the futurist in the scientific community falls flat on its face by the somewhat oversimplified way in which the author describes it. The story felt overly engineered with author failing to establish a credible relationship between the events of the first act and the latter revelations.
That been said while Origin isn't that different from the previous books, it felt a lot less enjoyable not unlike Inferno . Although Inferno has something that's lacking in all of the Langdon series and that is how it's the only one of Dan Brown's books that actually addresses a pertinent issue. Compared to Inferno , the central theme behind Origin seemed a bit far fetched and ultimately disappointing in that the anticipation built up by the events of the first act is ultimately let down by the final reveal. Perhaps i am the one at fault expecting a bit too much from this one book, expecting another Da Vinci Code. Perhaps I shouldn't over think it and just enjoy this fine piece of literature.

At the end of the day, Origin is really good Dan Brown novel, it might be a harder read than its predecessors but it still has all of the right ingredients.
Books Dan Brown Origin