- December 29, 2017
While Apple continues to deny that it hasn't been purposely slowing down older iPhones in order to make people buy newer iPhones, a look at historical Google searches shows otherwise.
A look at a chart compiled by Juan Bagnelli shows that a correlation between searches for the term "iPhone is slow" and the release of a new iPhone. Searches by users who were concerned that their iPhone was getting slower seemed to peak around the time a new iPhone is released. 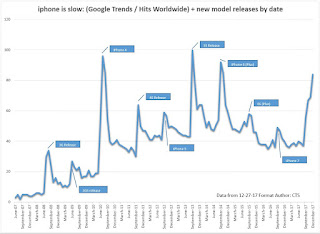 While Apple might want to explain it away as the result of the improvements in the processors found on newer iPhones but thanks to the recent Batterygate drama, we know that Apple has been making those iPhones slower via software updates.
Apple iPhone