- February 24, 2018
A bit of a while ago, the nice blokes at Opera announced that they were going to be shutting down their Opera Max data saving and VPN app mostly because they couldn't figure out how to make any money off it (Who would've thought it would be hard making money off people who are trying to save money). However fortunately for us penny pinchers, Uncle Samsung has swooped in and saved the app but in doing so have rechristened the app Samsung Max (Which is a rather clever name for such an app). 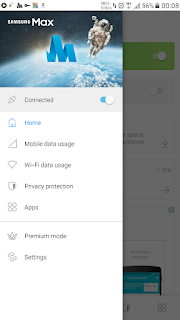 For the most part the app works and looks exactly the same as the previous app minus a new coat of colours (Eh, the Emperor's got new clothes). It's got the same features such as data saving and the privacy mode, they've retained the Premium "ads on yer lockscreen" and also the ads in the app well as you know Samsung needs to make a bit of money considering Apple is making all the money from the sales of smartphones. However Samsung did something I very much liked and that's getting rid of the pesky timer which annoyed me to bits (Thanks Sammy, you alright mate).

If you wanna give it a go, you can download the app from either the Google Play Store or sideload it from APKMIRROR 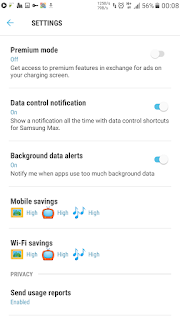