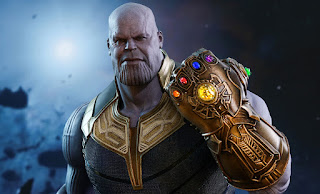 So I finally got around to seeing the new Avengers movie and it was amazing, I walked out of the cinema with a deep sense of pride for what Marvel had managed to accomplish with the movie.  The movie highlighted just what one could accomplish with time and proper planning.

I had high hopes for the movie and it matched my expectations perfectly, the first time any movie had done that since Chris' Dark Knight Trilogy. The move away from Marvel's world puppies and bunnies where the hero regardless of how much better villian was something that I've longed for since No country for old men.

Watching Marvel's greatest and brightest struggle to deal with the unstoppable force that was Thanos was heart warming. While many might see the "mad Titan" as the villian,  he was the hero or at the very least an anti-hero. His mission wasn't about emassing all that power for himself or being a conqueror, he only sort to restore the chaotic universe back to a state of balance and tranquility like Ozymandias  did for the world in the Watchmen movie (that's another brilliant but tidiously long movie). While Thanos might have achieved his aim, but there wasn't a clear Victor as both sides shared in the losses.


Infinity War is without a doubt the best Marvel movie you'd ever see. It wasn't a surrealistic as others. It was the one comic book movie that would leave a mark in the hearts and minds of moviegoers introducing young children to the realities of life and have grown ups getting in touch with their feelings.

In summation, Infinity War is the one comic book movie everyone needs to see. Marvel hit a home run with this movie, ensuring that every scene was integral to the movie. The jokes was top-notch, the fight scenes were amazing and the CGI held up quite well. In the end, Marvel managed to accomplish what DC couldn't with BvS; a dark and sombre movie that was ultimately brilliant.