- July 10, 2018
In a bid to help fight misinformation or fake news, WhatsApp would be marking forwarded messages, which constitutes more 99% of the fake news been spread on the Internet (don't quote me on that) , as forwarded  going forward. 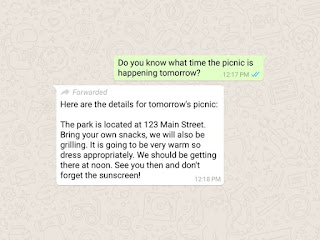 While this seems like a pretty good move by WhatsApp, it really helps no one. Flagging messages as forwarded is all too ambiguous and carries no message beyond telling the other party that I cba.

If WhatsApp was really serious about it they should build in a database of top forwarded messages into their app which would flagged those obviously fake health warnings and what not as Fake News, at least so that some of my family members would know that the founder of WhatsApp isn't shutting down the platform.
apps Fake News Whatsapp