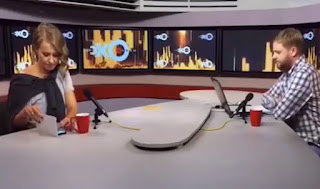 Samsung is reportedly suing Ksenia Sobchak  their Russian brand ambassador for using an iPhone X on live TV is a breach of her contract with the conglomerate. Sobchak who's a journalist, politician, and reality TV star and also said to be Russian president Vladimir Putin's so-called "goddaughter" had been hired by Samsung as the face of Samsung in Russia. Under the terms of her contract she's expected to use Samsung's smartphone exclusively in public. However in a live television stint, Sobchak was found to be using an Apple made iPhone X which is tried to hide.
The incident isn't Sobchak's first infraction, she has also been spotted using an iPhone on several occasions in public and Samsung has had enough of it. The $1.6 million suit is believed to be a lot more than Samsung is reportedly paying her to be an ambassador.
This isn't the first time a celebrity has been found using a product other than the product they have been paid to use. Adam Levine had been found to be using an iPhone while been contracted bound to Samsung in 2014.  Spanish Tennis star David Ferrer also broke his contract with Samsung when he caught promoting the Galaxy S4 on Twitter using an iPhone. Same happened with Alicia Keys who was supposed to be using a Blackberry and Gal Gadot with Hauwei Mate 10 Pro.
It's crazy that these celebrities don't have people managing their affairs better or Android manufacturers keep paying celebrities who don't use their phones to promote it when they could take a page out of Apple's playbook and promote their products using movies and TV Shows.