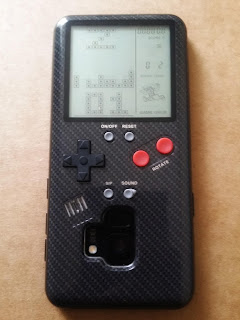 I stumbled on this little gem while on perusing on Aliexpress and it immediately connected with me and my memories on the past. whilst I don't really remember that time as fondly as most would but this gem helped me get through those times, I did spend quite some time playing the games on it. So I just had to get it, and at less than $13 it mustn't a purchase that I needed to mull over.

The Brick Game case looks like just every other case made for the modern smartphone when viewed from the front but things start to get interesting once you flip it around to the back. The Back houses the rather sizeable display, a D-Pad button, two (A-B) trigger buttons, on-off button, start (SP) button and a reset button. The back also has a cut-out for the camera and the flash. The layout on the back is inverted and you'd have to flip your phone over every time you want to play some games or go back to using your smartphone. While I didn't really care for that small inconvenience but there is nothing they could have done. The buttons were of the right size which made playing the games quite manageable and the display was exactly as I remembered.

The case I picked out was a black case which complimented the colour of my phone.
The texture of the case felt just quite right and the case felt sturdy like it could take a tumble down the pavement.  The sides had required cut-outs for the ports.

At the back,  cut-outs for the camera and fingerprint sensor which  I'd say improved the accuracy of my S9 by quite a margin

the inside of the case there's a firm paper covering the electronics, you will  also find a cut out to insert a coin battery (watch type battery) while it didn't come with any, a quick visit to the store solved that one. 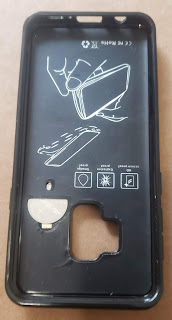 GAMEPLAY
After snapping it on, Gaming on this case took quite a bit of getting used to; It has been ages since I last played. After a few minutes I got used to it and was able to play those games that I loved. Tank took some getting used to, it seemed a tad slow paced and less fun than I remembered. The racing game was exactly as I recalled and took no effort to get in the swing of it. And the same applied to Tetris and Blocks.

Overall this is a pretty decent case that's well worth the money paid for it and the price puts it firmly in the affordable bracket. The addition of second screen and keypad is a big bonus on top of it all. The case feels sturdy and is sure to protect the phone from falls and tumble provided that it doesn't fall on its face (although the edges of the case are raised and should take the brunt of the fall). Besides serving as a case and portable game console, I found that the case has helped me improve the accuracy of the fingerprint sensor, before I used to be more deliberate about the placement of my finger to get it to work. But now I could just place my finger and voila.